When the Club started in late 1960, mouth to mouth resuscitation had just been introduced.

The equipment in those days was quite different to the equipment of later years. Surfboards were ‘long boards’ or ‘racing boards, made of hollow ply wood. Boards were 16 feet long, and double skis were 22 feet long.

In the early days of the Club, the ‘Bible’ was the ‘Blue Book’. This was the Handbook of Instruction and Examination. In the early 1960s, members paid the princely sum of 3/- (three shillings, about 30 cents) to purchase the Blue Book.

A bronze squad was usually made up of six or seven new members. The reason for this is that a reel, line and belt team was made up of the following; beltman, reelman, and first, second and third linesmen. For an examination, there was also a patient. Accordingly, for an examination, six members constituted a bronze squad. The time limit for the beltman to swim out about 200 metres to the patient, dragging a line, was 10 minutes. As each member had to rotate through each position, this part of the examination could take up a considerable time.

It was at the start of the 1962-63 season that an Air Force Reserve comrade of Tony Kidney’s, Tony (Obe) Dyer, who was to become one of the stalwarts of the Club, transferred into the Club. Tony had been a member of Brighton SLSC for a number of years, and brought a wealth of experience to the Club. Over the years, Obe’s contribution has been extensive, and he was honoured with life membership for his service to the Club.

During the 1963-64 season, Robin Kidney, the captain at the time, was acutely aware of the small number of members of the Club, and that each member would have to participate in a number of events at carnivals. He decided that it would be a good idea if all members were, as they would be called today, ‘multi-skilled’, in that every member would be proficient in all areas of lifesaving. He therefore introduced the Patrol competition.

The patrol competition involved all the patrols and for a number of years there were only 5 patrols: A, B,C, D, and E. This meant that the four patrols that were not rostered on for the particular Saturday, participated in the competition. The competition comprised the following:

The objective was to have all members competent in swimming, paddling surfboards and rowing a surfboat. 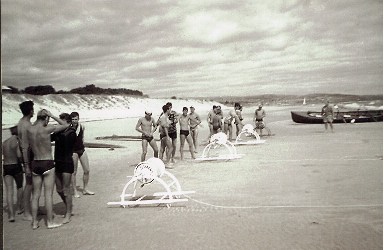 Saturday training, which was club training, therefore had members competing in a surf race, belt race, board race, beach sprint, surfboat race, followed at about 4.00pm by the handicap surf race. Needless to say, the members were quite a fit bunch of lifesavers, competent in all areas of lifesaving, due to the initiative of Robin’s introduction of the patrol competition.

It was also during the 1963-64 season that the former captain of Seacliff SLSC, Dennis Price, joined the Club. Like Tony Dyer, Dennis brought a great deal of experience to the Club.
The 1966-67 season, under the captaincy of Tony Kidney, the former vice-captain, was the most successful in the history of the Club up to that point. The highlights included the Club gaining the second highest number of awards for a season, with twelve bronze medallions, two qualifying certificates, and the Club’s first examiner; Tony Dyer. It was this season that saw the Club also win its first State Title, a place in the ‘Wales’ Competition, and more qualified members than at any previous time.

It was at the start of the 1972-73 season that training for the Bronze Medallion was changed quite dramatically from the R & R six man drill system that members were familiar with, the system having been in place for over 60 years. Not only did new members have to be trained in the new examination system but it also placed quite a burden on the instructors.

Thank you for reading the first four chapters of our Club History. A book is soon to be published titled

The book has been written by two of the Club’s founding members, Tony and Robin Kidney. The book will be launched in March 2016. Stay tuned to this website for updates on the books launch date, location and cost.

To read more about the Club’s history, order your copy of the book now by emailing info@somertonslsc.org.au