It was during the 1962-63 season, and after the success of the ‘games’ night the Club had the funds to be able to construct a clubhouse. This would enable the club to store the equipment, which by now was quite significant. The Club had acquired two more reels, with lines and belts.

While having the funds to do so, the question was where to build and how to go about getting the land to do so. An early option that was explored was the ‘J Miller’ park adjacent to the Somerton Yacht Club. However, for legal reasons, this option came to nought.

However, all was not lost. While the Club was in the process of raising the funds to do so, there were a lot of behind the scenes negotiations being carried out between the State Government, Brighton Council, Minda Home, and executives of the Club.
Having the funds, and now the land, it was ‘full steam ahead’ to construct the clubhouse. Again, the Club was fortunate in having an auxiliary member on the committee; Mr Forbes Weir of S. J. Weir Building Contractors. Forbes was co-opted into arranging not only the purchase of the original shed, but also its construction. The ‘shed’ was a forty foot by twenty foot garage ( 12 x 6 metres). It had one large sliding door at the front, an access door on the side, and two wide windows on the seaward side. 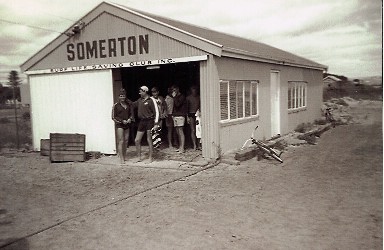 Members can recall the enjoyable times that they shared in the ‘Shed’, with ‘The Shed’ being the home for many social activities. These included New Years’ Eve parties, morning teas, lunches and afternoon teas. All of this without a kitchen!

The Club was very fortunate during the period 1965-68 when a number of members joined the Club who throughout the Club’s history, have provided great service to the Club. These include Robert Lamerton, Peter Frankcom; 1965-66, Tim Westover, Paul Lewandowski, Andrew Bowden, Bob Golding and Mark Cusack; 1966-67, and Bob Hood in 1967-68. All of these members went on to fulfil various leadership roles within the Club, and some have maintained a lengthy association with the Club. As mentioned later, Bob Golding served as President for a record eleven years, and Bob Hood is still very involved with the Club.
The approved lines for the reel-line were either nylon or waxed cotton. With waxed cotton lines, it was necessary before the start of season to wax each line. This meant removing about 400 metres of line from the drum, stretching it out, and then running it through hot wax. Needless to say, this developed into somewhat of a ‘get-together’ for members and quite a social occasion. Many members will recall being in the Shed at the end of winter (when the footy season had finished, unless you were playing in the finals), with lines stretched out to the fence posts and standing around having a good time. Once the line had been waxed, it then had to be wound back onto the drum of the reel. All of this took quite a bit of time, but members will look back on these times with fond memories.

Another activity that occupied members during the ‘off-season’ was the maintenance of the surfboat. It is important to remember that during the time of this history, surfboats were made either of wood, or laminated plywood. This is the era before moulded surfboats. The first two boats that Somerton had were the ‘JT Hankey’, and the ‘Cecil Anderson’. Both of these boats were carvel built plank boats. To maintain the boats in good condition, it was necessary to remove all the old varnish, and then re-varnish with at least two coats. As can be appreciated, it took a great deal of time to do all of this, particularly the removal of the old varnish.

Many members of the era of the ‘Shed’ believe that many of the events that occurred in the ‘Shed’ set the foundation that the Club enjoys today; family values, willingness to share and to serve the community, and above all, to make welcome all who visit the Club.

Thank you for reading the first four chapters of our Club History. A book is soon to be published titled

The book has been written by two of the Club’s founding members, Tony and Robin Kidney. The book will be launched in March 2016. Stay tuned to this website for updates on the books launch date, location and cost.

To read more about the Club’s history, order your copy of the book now by emailing info@somertonslsc.org.au