Somerton Surf Club – there’s something for everyone

Whether a family enrolling children in nippers, a champion athlete, a beach lover or someone who enjoys the magnificent surrounds of the Somerton foreshore, the Somerton Surf Club has something to offer. New members will find the atmosphere of the club very inviting, and provide a basis for meeting many new friends, keeping fit and performing a great community service.

Somerton Surf Club is especially renowned for its “family friendly” environment; the kids can join in the nippers program while Mum and Dad can become Age Group Managers, water cover, BBQ chef or work behind our famous “Buddy Bar” in the shed, there’s something for everyone. 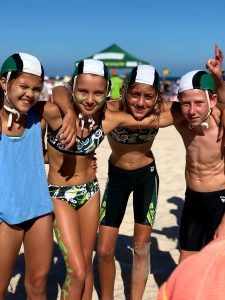 Somerton Surf Club offers training to young and old alike to complete their Bronze Medallion – yes, you too can become a “Bronzed Aussie” – but first you must join as a member.

Training incurs a small fee that includes use of equipment, a training manual, consumables and guidance by one of our energetic and qualified instructors. The bronze medallion is a prerequisite if you want to be a patrolling lifesaver. As bronze training is structured as a group activity, new members will find it a great way to meet fellow new members, have a laugh, and learn invaluable lifesaving techniques. Our (Bronzies) members are required to Patrol over the summer in various roles from Radio Room, First Aid duties, Junior Water Cover, Roving Patrols, Carnival Patrols and of course our core activity, “Patrolling between the Flags”.

Somerton Surf Club has a number of membership options. The option you choose will depend on a couple of things; such as age, swimming ability and your ability to volunteer time to patrol at Somerton from October through to March.

Our “nipper” program is designed to teach children beach awareness and safety along with competition skills.

You are eligible to train to gain your Bronze Medallion which is the initial qualification you require to patrol the beach or provide Junior Water Cover.
This qualification requires you to be able to swim 400 metres in under 9 minutes and be prepared to be rostered on patrol over some weekends and public holidays.

One of the major roles that a surf club plays is to provide support and safety on the beach. To do this we have teams of patrols who are allocated times to be on the beach watching and helping the public to remain safe.
The base qualification required to patrol is the Surf Rescue Certificate (SRC) which is available to anyone over the age of 13. A prerequisite of joining to train for your SRC is that you can competently swim 200 metres in under 5 minutes.
If you are 15 and over you can train and gain the Bronze Medallion. The majority of our patrolling members who are over 15 hold this qualification. The prerequisite for this qualification is to be able to confidently swim 400 metres in under 9 minutes.
If you can’t swim and meet this time then you still have other options. You can gain a First Aid qualification or Advanced Resuscitation qualification and still patrol while training to improve your swimming ability. Somerton Surf Club offers lanes at the SA Aquatic Centre, Marion on some week nights for swim training. Our Swim Captain sets training programs and keeps a watchful eye on all lap swimmers.

To join Somerton Surf Club as a patrolling member you need to be prepared to volunteer your time to patrol the beach. Our patrols normally operate from mid-October to early April every Saturday and Sunday plus public holidays. Our patrol time is 1.00 p.m. to 5.00 p.m. with patrol members required to sign on a ½ hour earlier to set up patrol and then allow another ½ hour at the end of the day to pack up. Patrols are also rostered for special events and may be required at other times than those above. We have about 8 patrol teams and they are rostered over this period.

Patrols are fun; they are a great way to meet others within the club and also members of the public. There are many activities throughout the day plus there is always the odd game of beach cricket on a quiet day.

If don’t think you can commit to this requirement you again have options. Parents joining their children in the nippers program, gain their Bronze Medallion and then gain patrol hours by providing water cover during “nippers”, junior training sessions or at junior carnivals.

You can also join the club as an associate/social member and assist in many areas such as fundraising, bar and bistro, BBQ, and many other activities.